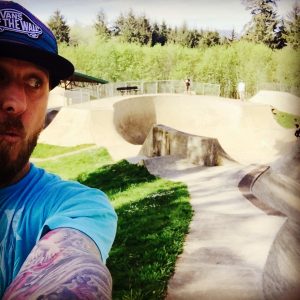 Berto Boyd began skating ditches in the early 80’s and made his first board with rollerskates and plywood. His uncle taught him how to surf in Hawaii when he was 9 yrs old at Rocky Point on the North Shore. By 1987, he was sponsored by a local skate shop “Hot Tropics” and doing demo shows (street ramps and boomboxes in tow) all around town with his buddies. His house in Mobile, AL was filled with skaters every weekend that came to skate his quarter pipe, launch ramps, and the 9ft half pipe complete with a skate swing (hole drilled thru center of board w rope knot and ski handlebar) hung from a branch in the middle of the ramp. In 1990 he moved to Ventura, CA and soon became an accomplished surfer with his home break being the infamous “South Jetty” in Ventura Harbor. Berto continued to skate street after the backyard ramps disappeared but then soon dedicated all his time to studying the Classical Spanish guitar. By 1998 the Internet had ruined surfing anyways with the crowds so Berto decided to leave the beach and pursue a music career full time. Shortly after returning from Spain in 1999 with his newfound European education, Berto continued playing professionally and teaching to over 40 students a week. As a highly sought out music broker and concert guitarist, he soon forgot all about his earliest passions which were skateboarding and surfing. And then as fate would have it, he moved to Oregon with his new family in 2012 and was completely blown away by the skateparks in the PNW. Having grown up in the 80’s-90’s when there were no skateparks like these he knew something was about to change. Soon after healing from his second back surgery upon moving here, he decided to get back on the board and has found his fountain of youth and childhood passion once again. As a new member to the BCSA, Berto has helped rekindle the fire into the organization and brought new ideas to the table such as crowdfunding in an effort to build a better park in Corvallis. In 2016, Berto started Corvallis Skateboard School in order to raise funds for local skateparks. When he’s not skating, he’s busy playing and composing classical and flamenco guitar music. You can check out his artist page here. 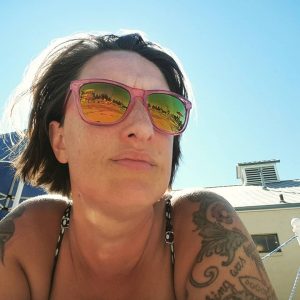 I grew up in the Pacific Northwest and was a quintessential “tom-boy”. I loved skateboarding from the minute I found it and made sure I surrounded my self with the culture as much as possible.  But in the 80’s and 90’s women were very underrepresented in skateboarding.  It wasn’t until the early 90’s and the popularity of snowboarding that more females started crossing over to skateboarding and getting photo’s in the magazines.  That’s when when I really starting skating and it became a massive part of my life.

In 1993 I moved to Mt. Hood to work at the mountain and snowboard as much as possible.  During the summer we skated the “park” in Government Camp set up by the High Cascade Snowboard Camp and went down to Portland to skate City Skates and curbs and light-poles behind industrial buildings.  In 1994 I got on a plane and went to San Diego to sneak into the Action Sports Retailer show and bum around Southern California for a couple weeks.  I ended up staying for six years and working in the Skate and Snow industry with my last position being at VANS as the Marketing Manager for Skateboarding and Snowboarding, responsible for sponsorship contracts, media coverage, ad campaigns, and promotional events.  I was one of, if not the first, female to manage and  regularly travel with a professional skateboard team and was fortunate enough to travel to hundreds of local parks, skate shops and local skate spots and got to experience amazing skating with legends like Steve Caballero, Omar Hassan, Kristian Svitak, Geoff Rowley, Carabeth Burnside,and John Cardiel.  I worked with VANS during the time when skateparks began making a comeback in every town and VANS opened multiple skateparks at malls throughout the country. This was also the time of giant skateboarding contests and I attended and managed promotions and team needs at events like Triple Crowns, X-Games, and Gravity Games.

During this time I also volunteered with Girls Learn to Ride and helped organize and teach skateboarding and snowboarding to females of all ages.

In 2000 I was missing family and Portland and took a Team Manager position with SAVIER and worked with an amazing team of guys including Brian Anderson and Stefan Janoski.  Being back in Portland was great and it opened up a whole new world of skating for me.  I connected with an amazing group of female skaters and we skated parks all over Oregon and spent much of our time at Burnside.  After about a year with SAVIER I decided it was time to go to college so i quit the industry and started school.  I moved to Corvallis and received a B.S. and a M.S from Oregon State University and now work for the state of Oregon in community and economic development.  Being a member of the BCSA Board allows me to still connect and give back to skateboarding. 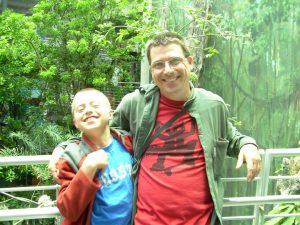 Born and raised throughout SoCal, I started skating in the early 80’s. Bombing hills in Laguna Beach, big ollies (relative to that time period), launch ramps, wall rides and grinding painted curbs was my daily routine. After taking some time off skating to get a degree or two in Geology I am back skating harder than at any other point in my life. Back in the day I only skate a few pools, the team Alva bowl in Capistrano and the Nude bowl, now with all of the excellent skateparks in Oregon I am finally learning to skate vert-transitions. 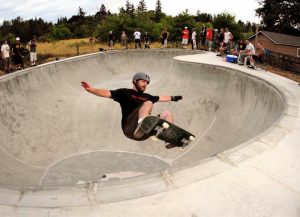 Dan’s obsession with skateboarding started somewhere around 1986 in the flatlands of Illinois. Skating the streets, backyard ramps, and anything that he and his friends could build, he fell in love with skateboarding and has never looked back. He moved to Oregon in 2001 and has been in Corvallis for the last 10 years. As life-long skater, husband, and father, the Danimal enjoys raising his youngsters, getting grinds, popping ollies, and he’s still got a few flip tricks left in his bag. He’s stoked to be a part of helping to get more skateable terrain built in Benton County. 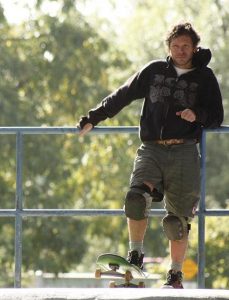 From the coastline of Humboldt County, CA, I was surfing and skating by the early 1980’s. Half-pipes & pools were the skate terrains of choice and, when these went “out-of-style”, I hung up the skate for over a decade. Now that skateparks and pools have returned and have popped up in nearly every town across the nation I’m back. I’m now a consulting biologist in Corvallis, and most of my free time is spent surfing the Oregon Coast with Adrienne and skating Oregon’s parks.

The origin of his birth was not determined, there for no one knows exactly how old he is. They say he was raised by robots, some may even say that he came from the heavens. All we know for sure is that he has been on this earth for about 20 years now. He has been known to roam the forests of Oregon to shred the gnar of the unsuspecting. You may see this creature lurking in the shadows of Corvallis, for that is where he calls home. Kevin feeds in the local downtown area, for he has created a dwelling in the Peak Sports Board Shop. His diet consists of Big Mac’s and 2 dollar breakfast specials. But sadly enough the habitat of Corvallis does not support the Gnarlyous, he needs to have a variety of obstacles where he can perform his feats of amazement. You can help the Shredacculous Gnarlyous by donating to the B.C.S.A. where all proceeds go to support this majestic creature.